Hüzün, the Turkish word for melancholy is among the most mysterious concepts I have ever come across. Hüzün has an Arabic root, and in one sense refers to a type of spiritual anguish, suffered when we grow in attachment to worldly pleasures, and in turn experience a distance from God and spirituality. However, the modern concept of hüzün goes far beyond the history of the word. It is not only a spiritual affliction experienced by devout Muslims, but also a much more ambiguous emotion felt by the residents of Istanbul. Turkish author Orhan Pamuk described hüzün as “the emotion that a child might feel while looking though a steamy window.” Hüzün is not the melancholy of a single person, but a dark mood shared by millions of people together, by the entire city of Istanbul. Although a grim concept, hüzün is central to Istanbul culture; it binds Istanbullus together, and is shared with pride throughout the community.

To a newly arrived visitor, the deepest presence of hüzün may go unnoticed, or simply described as a mysterious presence or air about the city. I myself, emerging as a new resident of Istanbul, was ignorant to the strong effect hüzün has over the city. In the first months, I characterized the feeling as a magic, or dream-like quality that possesses every detail of the strange and beautiful city. Indeed, it is a kind of magic, a type of collective awareness that is unique to Istanbul. However, as the months wore on, and winter settled over the Bosphorus, I felt the presence of hüzün so tangibly I could almost touch it, and I experienced the heavy weight of Istanbul for the first time. These works are my hüzün, my Istanbul, my surreal world.

“To feel this huzun is to see the scenes, evoke the memories, in which the city itself becomes the very illustration, the very essence of huzun. I am speaking of the evenings when the sun sets early; of fathers under streetlamps in the back streets returning home carrying plastic bags. Of the old Bosphorus ferries moored to deserted stations in the middle of winter,/ of the children who play ball between the cars on cobblestoned streets;/ of teahouses packed to the rafters with unemployed men;/ of ship horns booming through the fog;/ of crowds rushing to catch ferries on winter evenings;/ of the city walls, ruins since the end of the Byzantine Empire; of the markets that empty in evenings;/ of the seagulls perched on rusty barges caked with moss and mussels, unflinching under pelting rain;/ of crowds of men fishing on the sides of the Galata Bridge;/ of the busses packed with passengers;/ of the little children in the streets who try to sell the same packet of tissues to every passerby;/ of the underpasses in the most crowded intersections; of the overpasses in which every step is broken in a different way;/ of beautiful covered women timidly bargaining in street markets;/ of the view of the Golden Horn, looking towards Eyüp from the Galata Bridge; of the simit vendors on the pier who gaze at the view as they wait for customers; of everything being broken, worn out, past its prime;/ I speak of them all.” 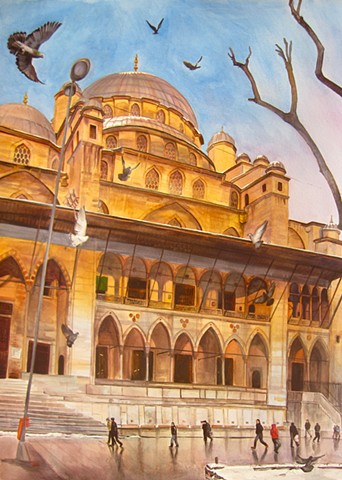 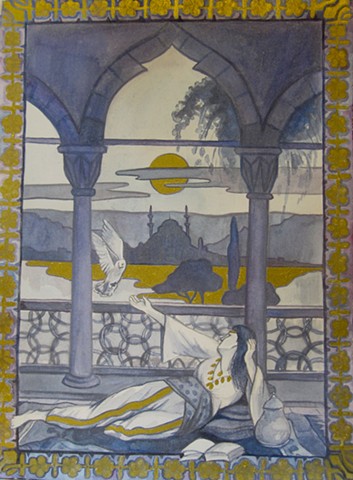 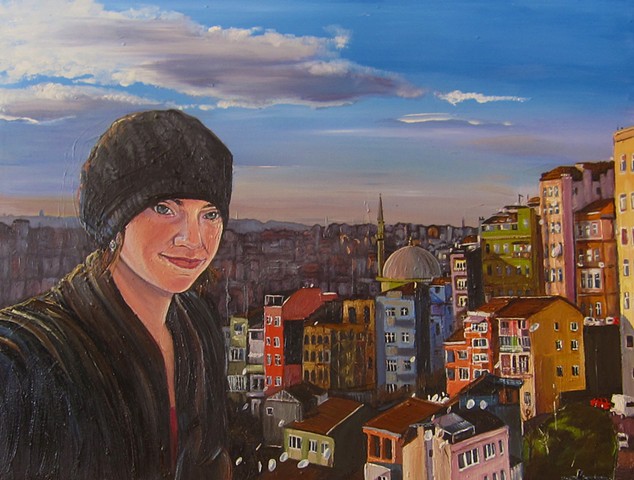 Self Portrait in Istanbul
Oil on Panel
18"x24" 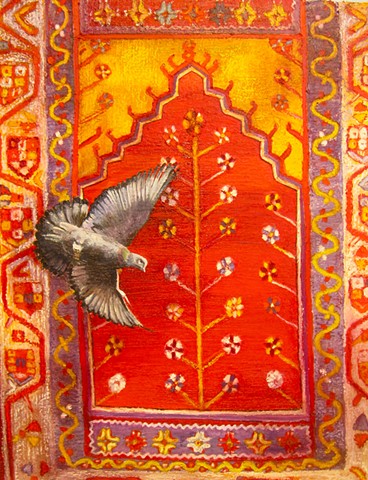 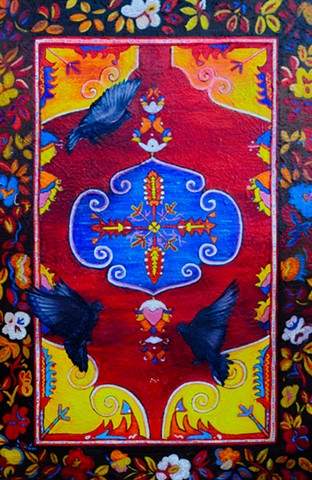 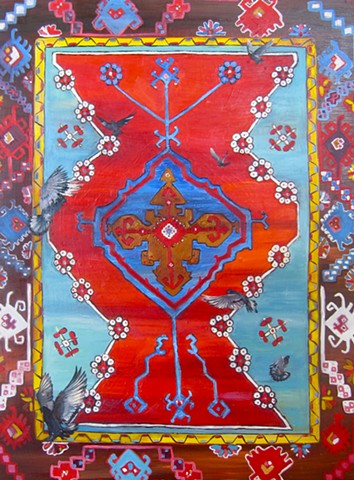 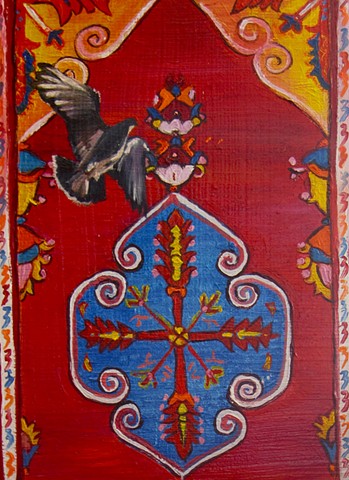 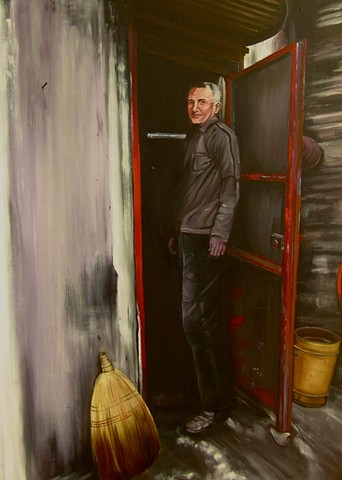 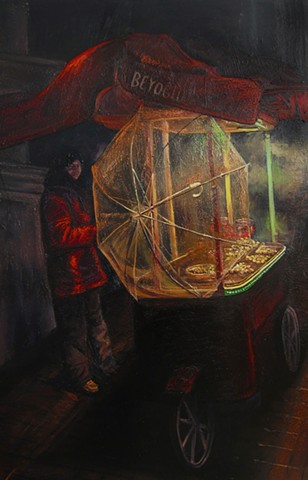 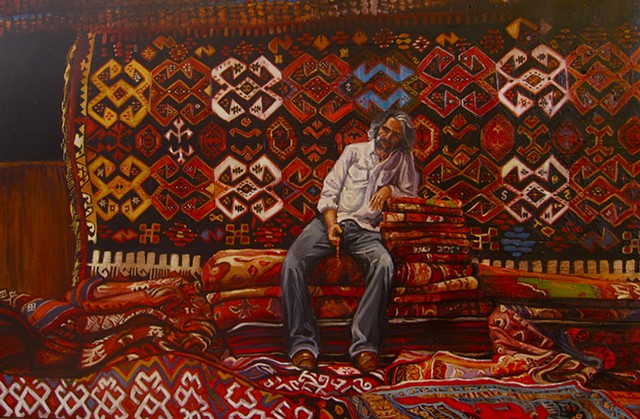 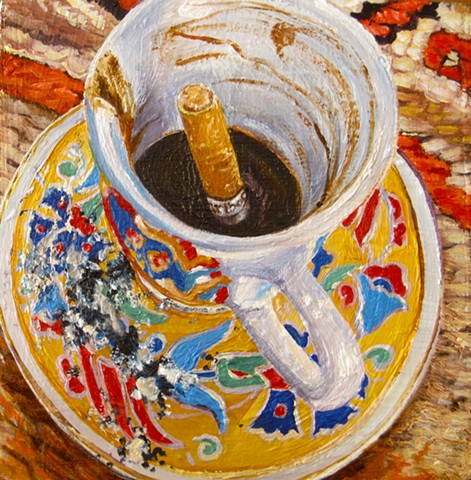 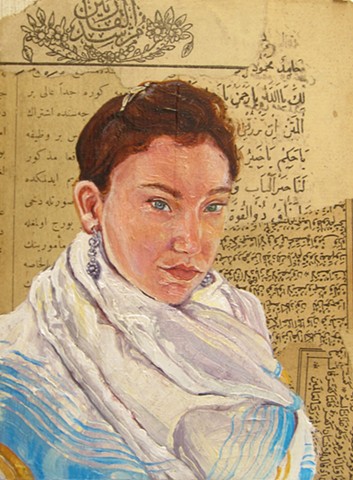 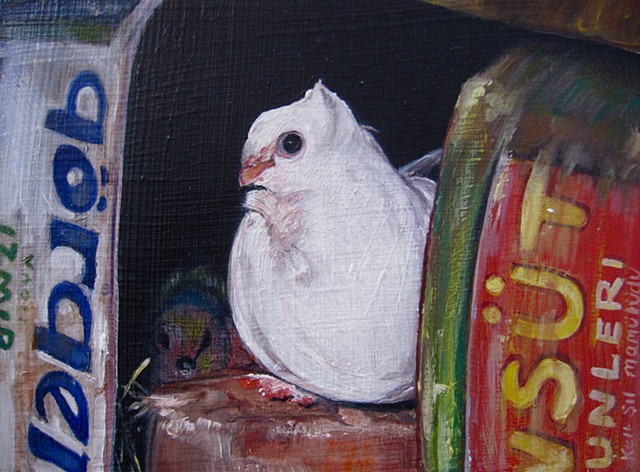 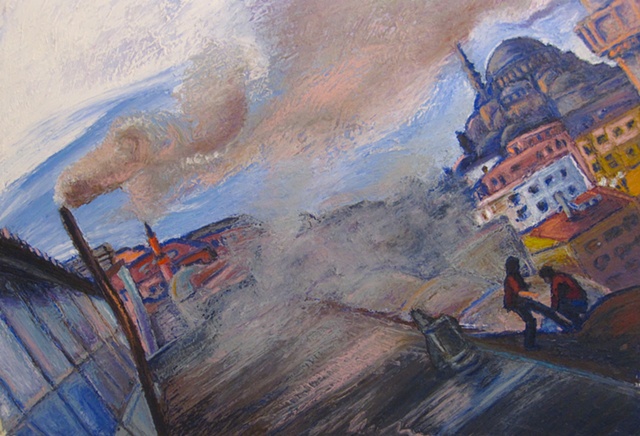 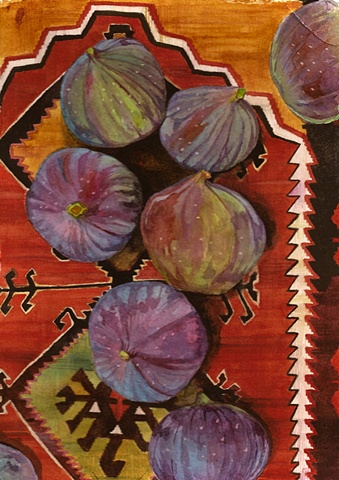 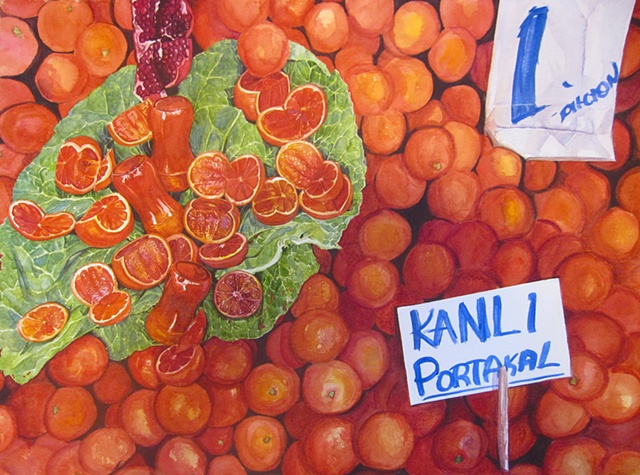